Happy Monday!!!   So here is my weekly update on my efforts to improve my dating life. I know I told you Monday I attended a Labor Day singles baroque hosted by the Metro Atlanta Christian Singles group. Every year during the Labor Day weekend the group hosts a series of fun events with food and drink.  The picnic offered the typical amusements of line dancing and cheese burgers. It was fun, more-so because it was nice to get out of the house. I didn’t meet anyone new but I did see two guys that I had met another event earlier that weekend.

On Thursday I met a nice & handsome photographer at a fashion event I attended.  I was there as a photographer too so it was cool that we had a topic of interest in common. We even talked about possibly networking to together on a project and he gave me his card; so we shall see what connection will lead too. If anything getting to know another cool artist.

I am excited to expand my social circle within these next 30 days. I mean of course I plan to expand it beyond September, but I excited to finally be intentional about it. See I am usually the wall flower, the quiet observer and I have always been more laid back in large social settings, so this is a huge deal for me to be making these vast steps in my dating life.

Furthermore, to add to the excitement I attended the It’s Complicated Tour; A love and dating seminar presented by matchmaker/life coach Paul C. Brunson.  It was held Saturday at the Woodruff Arts Center.  I found out about the event by happenstance after seeing Mr. Brunson on Dr. Drew’s Life Changers and looking him up of the internet. Good ol’ Google. Unfortunately, I am a self-help junkie and I’ve read Steve Harvey’s 1st book, Hill Harper’s book (which I did enjoy), Dr. Alduan Tart’s (very  encouraging) book and now I am getting a copy of Paul’s book when it comes out in October.

So back to the event, it started a little slow as there was a pre-mixer prior to the actual presentation. I wasn’t sure what to expect and I was nervous as all get out, but for what reason I do not know.  Of course there were more women than men, (that is a silly question to ask about an event in Atlanta) but I do think the ratio is given too much clout, so I choose not to add strength to it and will digress now.

According to the tour promo website, the event was supposed to be like The Tonight’s Show meets a mixer/mini concert. I think Mr. Brunson was very charismatic and did a good job entertaining and encouraging the women in the audience to have hope, a dream, a coke & a smile.

However, what he didn’t have was a “flow date” session which is what I guess I was hoping most would take place. If he did then I must have missed it when I drove home to get my camera so that I may take a photo with him to document the event. Though I don’t believe that was the case. I guess I was expecting to meet someone, but none of the 10 guys there were interested in me. At least if they were they didn’t approach me; which brings me to another topic Mr. Brunson brought up in his presentation, women asking men out.

Now, I have to say that I have tried this in my past but it hasn’t worked for me, on top of that, I am an introvert so it’s hard for me to fathom going up to a guy and asking him out for coffee without the thoughts of him thinking I am easy running in the back of my mind. I just feel I am a traditional gal and that a guy that is interested in me will speak up but maybe I am wrong.

For example at the event I introduced myself to a guy just to be bold and step out of my comfort zone and I don’t think homeboy was very interested. Why? Well, right after I introduced myself to him it felt as if he was trying to pass me off to his friend who too did not show much interest in wanting to converse with me. Now, I am a little analytical, but the second guy was already talking with a group of other females before I started speaking with the first one. Maybe my trendy nerdy granny look scared him.

Also, the guy gave me his business card but it was to his job not with a personal contact number, so that is how I came to my current conclusion. If he was really interest then he wouldn’t he have given me a home phone or asked me for mine? Idk.   I know so many great single females that maybe they would hit it off with someone in my circle but that is the challenge with dating. To be truthful I am really getting tired of these lowered expectations of dating and relationships. I think some people have the definitions of friendships and relationships confused with booty calling and playing pre-marital house but then again maybe I am just more traditional.

Okay, so I didn’t mean to go on a tangent and not finish my story about the mixer/seminar/after-party. And yes, there was and after party. In my mind I thought it was going to be more like the” flow date” session on Dr. Drew. I’m really stuck on that as you can read. The party was held at this place called Mingles and I don’t club much so I didn’t know what to expect. I was told by a church acquaintance that was also at the seminar that Mingles was a place where you could play board games like Sorry and Monopoly. Well…to my surprise that was NOT the case and it was a very poor environment to ask Mr. Brunson my dating dilemma questions as he could not hear a sister over the dj shout “drop ya booty to da floe!” I’m just saying, it was not the coffee house, spoken word paradise I imagined in my mind. But I guess that is why hind sight is 20/20. LOL.  Smh. So discouraged, I left the party early and went home to feed my cats misty & fluffy puff . Nah, I’m just playing, I don’t own any cats but I did go home and dished about my experience with a good gal pal of mine.  Single like me. Sigh.

On another note, I started kickball yesterday and I found out I have no clue on how to play the game at all but I am willing to learn. I think my strong suits are running and kicking but I can’t catch for crap. Don’t judge me! No, but for real I think this is going to be a long season. I am glad to have a reason to get out the house and I know this will be great exercise for me.

So, what is next? Well, I am going to hit up bingo night in my apartment complex. Maybe there will be a nice fellow with his own Medicare plan he can add me onto or may be, at least, I’ll able to expand my social circle a little more. Well, I shall see and then update you on it later. Well, let me go know and feed my cats.

Btw, here is the photo op with Mr. Brunson.  What do you think about my nerdy granny look?  :o) 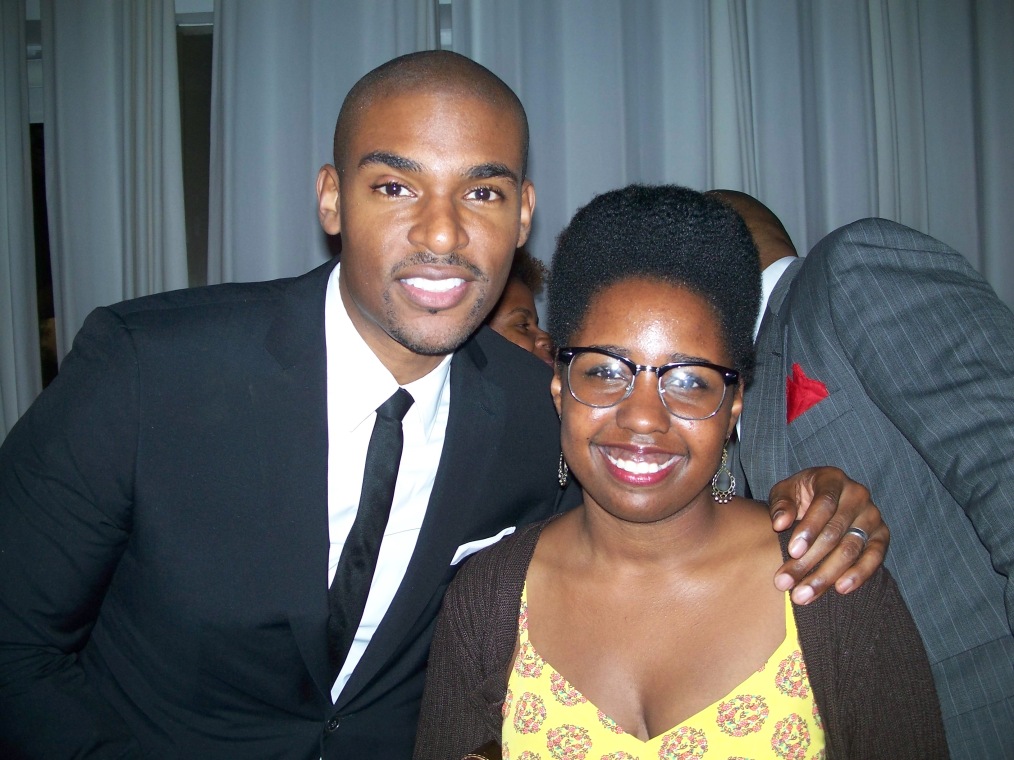